November 18th, 2009: I’ve updated the sportshow page with the new All Canada coupon and all the new dates for 2010. I also updated the rates page and will provide some new open dates once we have a few more groups sorted out. So far the 2010 season is looking pretty good, Aswap is currently sold out and Joint Lake only has 3 open weeks. At Bolton Lake June has filled up quickly and there are some larger groups in July and August that are helping to fill in the schedule. Late May and around the 4th of July there is a space for quite a few guests which has become a trend in the past few years. So far winter hasn’t started here in Winnipeg so we’re hoping for a mild winter and a normal ice out.

I spent almost a week hunting for Whitetail deer with Big Antler Outfitters in the interlake area of Manitoba. On the first day after about 30 minutes in the tree stand I decided to try rattling to see if I could get a dominant buck to come in to investigate. Instead a pack of gray wolves came right to my tree stand. I was in awe just watching the wolves circle the area looking for some deer that they could ambush while the deer were preoccupied with each other. I easily and legally could have taken one of the wolves but opted to keep my gun down and just watch instead. Unfortunately the battery on my camera was frozen so I didn’t get any video which would have been better than anything. I spent a few more days in various stands hoping to get another opportunity at a wolf or deer. I rattled one small buck into a fresh scrape that I found and I came face to face with another small buck while walking away from the stand at the end of the day so that was exciting! On the last day with the sun setting a decent buck came along the game trail and I took it with my muzzleloader at about 50 yards. I might go back for a couple more days with my riffle to see if the bucks have really started to move yet because the season was very late this year due to the above average temperatures we’ve had this fall. Below is a picture of me with my Buck overshadowed by the 150 or so class buck shot by another guest named Mike. 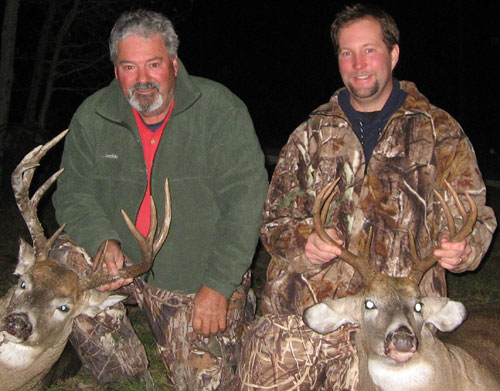