Trevor and Jodi Dick are the 2nd generation owners of Bolton Lake Lodge. Trevor’s father Brian Dick bought Bolton Lake Lodge in 1988 as a project for the Manitoba Government. His job was to sell the lodge as it owed money to the Province, but there was a lot of dispute over who he could sell the lodge to. In the end, Brian bought Bolton Lake and his plan was to give it a quick overhaul and sell it to whomever he wanted for a quick profit. Brian quickly learned that Bolton Lake was a special place with unlimited potential for expansion and improvements. All of Brian’s kids worked at the lodge in one capacity or another over time as it became the family business. 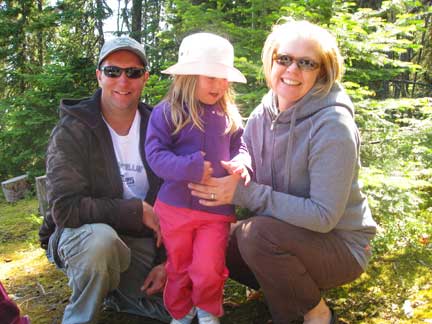 Major projects began right away with rebuilding the lodge, building a runway, building outpost camps on Joint and Kitchi Lakes, buying Aswapiswanan Lake outpost and building the clientele from virtually zero to an average of about 400 guests per season.

In the year 2000, Trevor and his father bought Elk Island Lodge on God’s Lake as they were expanding rapidly. Brian managed Elk Island Lodge while Trevor and Jodi remained at Bolton Lake to continue to run Bolton Lodge and the outpost camps. In 2001, Trevor began to build a new kitchen, dining room, office and laundry building and a new 8 person cabin at the new site near the runway. In the early winter of 2002 Trevor moved the rest of the camp from a peninsula in the southeast corner of the lake, across the ice to the runway area. All the work to the new lodge and cabins was complete before the first guests arrived in 2002.

Trevor and Greg operate Elk Island Air Service together under Transport Canada and the Canadian Transportation Agency regulations to commercially operate their respective float planes.  Trevor is the Chief Pilot, Operations Manager and Person Responsible for Maintenance (no he doesn’t fix the airplanes but he makes sure the maintenance is done according to the TC regulations by licensed Aircraft Maintenance Engineers).  Greg is the Accountable Executive for Elk Island Air.  As Chief Pilot and Operations Manager, Trevor hires and trains the pilots and ensures that they are not over-worked leading to pilot fatigue by tracking every day and hour they are flying.  Trevor can step in to fly the C-206 when his pilot needs a day off and takes over all the flying duties in the fall when the guests are done for the season and he offers his services to the nearby First Nation’s to fly them to their moose hunting camps.  To maintain our air service, we have regular TC inspections, a quality assurance program and we amend our Company Operations and Maintenance Manuals to safely operate our airplanes.

In 1997 Trevor attained his Bachelor of Commerce, Honors degree from the University of Manitoba while he spent his summers guiding at Bolton Lake. After college, Trevor began his private pilot training and began flying for the outpost camps in 1998. In 2009, he completed his commercial license in order to be able to sub in if the full time float pilot cannot fly for any number of reasons.

Jodi completed her Bachelor of Environmental Sciences degree at the University of Manitoba in 1996. Trevor and Jodi met at Bolton Lake in 1995 while Jodi worked as a waitress and Trevor was guiding. Jodi has taken many book keeping and accounting courses and spends most of her time taking care of all the paperwork for the guests and keeping the kitchen, ordering and flights organized at the lodge during the season.

Trevor and Jodi were married in 1998 and have a daughter, Jordan who was born in the summer of 2006. They both love to travel and have taken Jordan to Mexico, Costa Rica, Phoenix, Vancouver and Orlando to Disney World to see all her favorite Disney Princesses. The whole family enjoy spending the summers together at the lodge taking care of the guests and having fun with the staff. Jordan loves to be outside, waiting for the planes to come to bring her donuts, fishing, going for picnics and swimming when the water gets warm enough. Trevor and Jodi both love to get out and enjoy a nice shore lunch with guests and to welcome guests back to the lodge at the end of the day to hear about their fishing stories from the day.

Although the time they spend with the guests is limited to a bit of time before and after dinner as most guests spend most of their waking hours out on the lake fishing, Trevor and Jodi truly look forward to chatting with their guests and catching up with them. 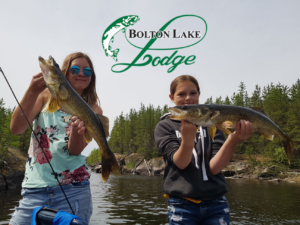 Here’s Jordan with her friend Kayla fishing in June 2018!

In the off season, Trevor plays hockey, loves to hunt for ducks, geese, moose and whitetail deer and he likes to get out ice fishing whenever he can. Jodi enjoys going to the gym, spending time with friends and family and takes Jordan to dance, gym, swimming, music and any other class she can find for Jordan. They all enjoy getting outside for tobogganing, snowmobile rides and they’re soon going to teach Jordan how to skate!  Update:  Jordan now plays hockey 3-4 times per week including practices, games and tournaments, she is a great defensive player, playing with lots of her best friends on the top team in our area!  Trevor helped coach when parent coaches were allowed but now that they’re more serious/older the teams have paid coaches.  Jordan also now plays volleyball on a competitive team and Ball in the spring/summer before coming to the lodge in July.

As the snow begins to melt at the end of every winter and the spring approaches, Trevor and Jodi anxiously wait to head to Bolton Lake for the summer season. Bolton Lake has always been a very special place to them and they truly love the opportunity to share Bolton Lake with all their guests.