Here are a few tips to help you once you’ve decided to come to one of our camps. You won’t need to fillet a fish if you’re staying at Bolton Lake, but if you’re going to an outpost, you’ll want to eat fish often during your stay. Remember, no fish are to be taken home.

How to fillet a fish:

1. To start, make sure the fish is dead to avoid injuring yourself. Make the first cut across the belly just below the pectoral fins. Then cut the belly straight down the middle to the anus. From the first cut you should turn the fish on it’s side and cut down to the backbone just behind the gill plate. Be careful to cut only until the knife touches the backbone. Do not cut through it.

3. When the knife blade no longer contacts the rib cage, push the knife through the width of the fish. The blade will exit on the bottom of the fish near the vent. Continue cutting along the bone until the fillet is cut off at the tail.

4. Now repeat the same steps on the other side of the fish. Make sure to keep the fish cool, even during the filleting process.

5. Remove the rib cage from the fillet by making a shallow cut near the top of the ribs and then sliding your knife just below the ribs. This is where you can lose a lot of very good meat so take your time. Use an upward stroke under the ribs to minimize wastage.

6. Remove the skin from the fillet by inserting the knife at the tail and cutting the meat from the skin. Hold the fillet in position by pressing down on the skin, with your thumb.

How to release your fish:

Some fish you might want to keep to eat and others you may want to release alive to grow and be caught another day. It takes six or seven years to grow a large trout or pike. You must preserve the large fish for future fishing, so you’ll need to handle them properly or they will die. Fish have delicate gills through which they breath oxygen. And their bodies have delicate internal organs. Here are five steps to follow to prevent injury to the fish you catch for release.

1. If possible, don’t handle the fish. It is covered with a protective slime. When you handle the fish you disturb the slime and the fish can develop a fungus in the spots you touch. That fungus may eventually kill the fish. Do not touch a fish with a dry hand. Simply reach down and release the hook from the fish’s mouth and allow it to swim away untouched. Small pliers or forceps facilitate hook removal.

3. When handling the fish, make sure that you do not put your fingers into the gills. The fish can survive if it begins to bleed slightly from the gills, but its chances of surviving major gill damage are slim.

4. Don’t squeeze the fish when handling it because you can damage its delicate internal organs.

5. Make sure that you revive the fish completely before releasing it. If the fish is exhausted it will turn over on its side or upside down. Large fish will require you to spend some time in reviving because they only come to the net after being completely exhausted. Small fish often don’t need to be revived at all because they are on the line for only a short time, and are usually not physically stressed by the event.

When you revive a fish, make sure you hold it upright and in a gentle flow of water so it can get its gills working and recover oxygen from the water. In still water, hold the fish gently and watch it pump water through its gills, providing much-needed oxygen to the fish. If the gill action is weak, or non-existent you may have to glide it back and forth in the water so the water flows through the gills. As the fish revives, its gills will work more energetically until it is able to remain upright in the water and finally swim away on its own.

Don’t try to revive the fish in the fast current. If it slips away, it will begin spinning and turn upside down and you won’t be able to save it. Revive stream fish in the gentle flows near the bank.

How to know where you are:

2. When leaving the outpost camp you should take note of where you are on the map and what area you are going to.

3. Along the way you should frequently look behind you for landmarks and for features to look for on your return.

4. You should use the map to identify islands and even points on the islands or the shore. This will help you determine the scale and provide landmarks. Swamps, old trappers cabins, rivers and creeks are all very good landmarks to take note of.

5. Knowing the basics; like the sun sets in the West and moss only grows on the north side of a tree can help determine which way to go.

6. Always let other guys in your group know which area you will be fishing and where you might go as a backup plan.

How to build a fire:

1. The location of you fire is very critical. Stay away from winds, moss and trees. There is a fire pit at the outpost camp, but if you decide to build a fire somewhere on the lake, you should pick the right location.

2. Collect dry grass, leaves and other small litter. The cardboard packaging from your new lures can become very useful in an emergency.

3. Put larger twigs and branches on top of the kindling and make sure that the wind cannot get at the pit.

4. Light the grass and leaves and let the larger kindling catch fire before adding even larger branches.

5. When adding to the fire, be sure not to squash it. Once it gets some strength air is critical.

6. Once there are a good set of coals, you can add almost any size log to the fire. Do not leave the fire unattended and thoroughly douse it with water before you leave for some more fishing. 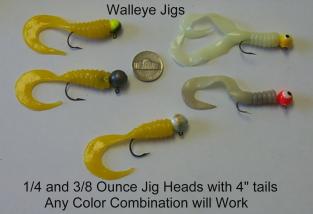 Plain jig heads work too but the Fuzz-E-Grubs have an edge to them.

Using scented and salted grubs and twister tails also give a distinct advantage. Berkley Gulp and Berkley Power Bait are the 2 most common.

Pink heads with white twister tails are used a lot at Bolton Lake.

Take plenty because you’ll lose them in the rocks. And if you’re catching fish, you’re in the rocks and losing jigs!

ALSO–bring a couple 1 and 2 oz. Jigs for lake trout. 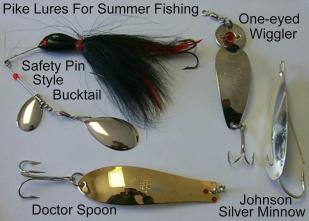 Any bucktail spinners with silver blades

Musky Innovations Bulldawgs in all sizes and colors are very effective at Bolton and the outpost camps. They have caught the most trophies over the past 3 seasons than any other lure. Click here to view some of their products www.muskyinnovations.com 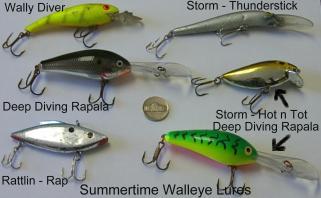 Storm Deep Thundersticks (in silver, or blue, and Fire Tiger)

The Husky Jerk and J9 joined Rapalas have been popular lately. 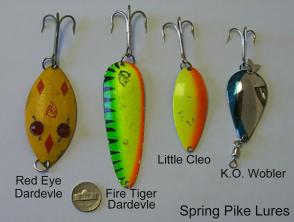 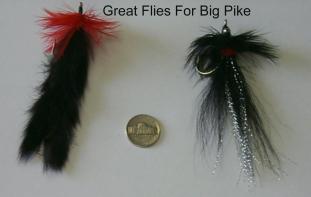 Streamers and poppers are very popular for the Pike. 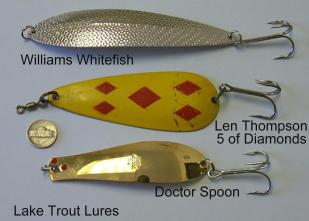 Frozen minnows are also used for the Lake Trout, either jigging or trolling.