October 19th, 2011:  Tom and I headed back up north for the better part of September to check on the lodge again, do a bit of hunting and to try to make a few bucks with the float plane.  Everything at the lodge looked good and we were able to put a few more things away as well as secure a couple things as well.  We didn’t spend a lot of time there because there was flying to do out of God’s Lake.  I did quite a few flights with locals going for moose hunts and Tom and I had a chance to spend a few days moose hunting.  We took a really nice Bull Moose on our last day of hunting, up until that day we had not seen a single moose, not even from the plane while I was doing other work.  First I spotted a cow and calf on an island, then we spotted another cow, calf and bull by a river.  It took just one shot and we had our moose!  Tom officially took this moose because I officially took the first one but we consider both of them to be ours.  It’s a team effort to get a bull moose, especially once it’s down!  Check out the pictures below!

The weather is really starting to change here in southern Manitoba, we should be getting snow any day now.  The Whitetail season is only a few days away but I’m not really sure how much time I’m going to have for that this year.  Tom and I are planning to try out a new area so it could be interesting.

The bookings for next season are looking good already!  In late August and early September we were very busy with guests planning for next season but lately it’s been a bit more quiet.  The newsletters should be printed within the next couple of weeks so they should be mailed in early November.

I’ve updated the sports show page for the January-March 2012 show schedule, please check it out so that you can come visit me at a show near you! 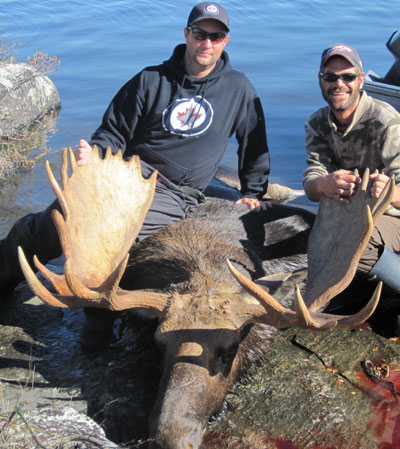 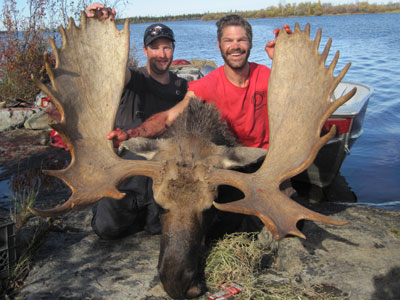 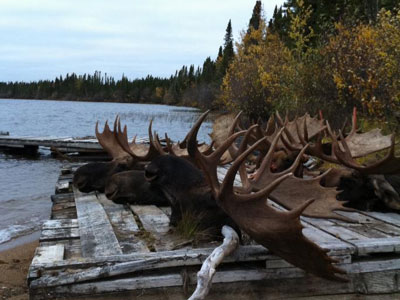