Made it to the lodge on Wednesday with Tom and Trevor (T3) with the new airplane.  We had to fly low and through some snow showers but about 100 miles south of the lodge the skies really picked up and we landed in the sun at camp.  See the pictures below for the aerial pictures of the lodge and the ice.  I took the pictures yesterday before flying back to Winnipeg.  I haven’t heard from the guys yet today but I’m betting the ice in front of camp is gone or at least half of what it is in the picture.  Once there’s open water around the ice and it can move around, it’s amazing how fast it goes.  I’m happy to see that it’s not wide open but again I have no doubt it will be before our guests arrive.  I’ll fly over Joint and Aswap when I go back up on Monday but I’m very confident that Aswap is open and Joint Lake will still have some ice on the main lake.  The river where the cabin will be open but it will be a few days before the main lake ice goes out completely.

The camp itself was in okay shape.  We had some visitors last fall and despite our efforts to screw things shut, they still managed to break in and help themselves to a bunch of stuff.  Mostly smaller stuff like fishing gear, clothing, movies, little bits of alcohol left behind and food was taken but we won’t figure out the extent of the theft until after all the staff arrive and notice what was taken.  It’s a real shame that we can’t leave camp alone without it being robbed and doors getting kicked it.  There are some people in this world who have no regard for others’ belongings and they just take, take, take.  In the future, I plan to keep somebody in camp late into the fall to keep an eye on our equipment and supplies.  To offset this extra cost I will look very closely at offering Moose hunts again.  With our own float plane now, we have more flexibility and can offer some interesting Moose hunting packages.

I’m really happy to say that the runway was in very good shape.  I packed it twice in the short period of time I was in camp and it felt really solid and dry!  I plan to pack it a few more times before the fuel and supply airplanes start arriving next weekend but if the weather holds out it should be perfect.  The guys are going to get the water running today to our guide cabin, there are no freezing temperatures in the forecast so it should be safe to get it all set up.  Water levels are about the same as they were last fall.  Our Av Dock is at the perfect height right now for the float plane, some years it’s under water and others it’s much too high so it seems like we have a very average year for water levels. 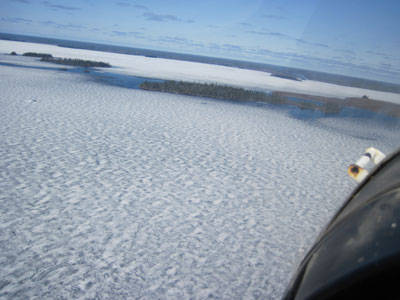 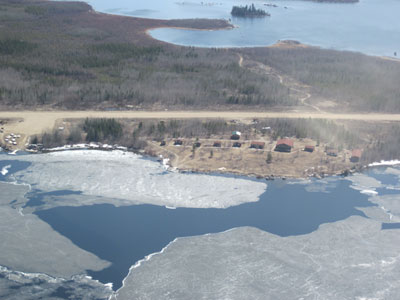