June 3rd, 2008: It’s been a busy spring getting things opened up and setting up for the season. The weather has been absolutely amazing so far this spring, only one real rain shower so far, no snow, blizzards or below freezing temperatures since mid May!!! The group who survived our May blizzard of 2007 is here again this spring and can’t believe the difference and they don’t know what to do with all the clothes they packed! We don’t normally see temperatures in the 70’s in May, but we’ve had more of those days already this spring then almost the whole month of June last season! More important than the weather is the fishing! We’ve had a great couple of weeks already at the lodge and the outposts! The first group into Aswap landed 24 trophy Pike over 5 days and the second group landed 12 trophies over 4 days!!! We broke our all time record on Brook Trout yesterday which was the first group to go for them this year, other than when I went to train a new guy on the river! The new guy, Robert took 2 guests over there and landed 58 Brook Trout and 15 of them were 20 inches or larger trophies!!!! We’ve been catching mostly trophy Pike so far this season with a few trophy Lakers and a couple of trophy Walleye to add to the mix. Having these warm sunny days has really made finding the big Pike easy.

Here are some long awaited pictures from this season, I’ll get some Brookie pictures soon. 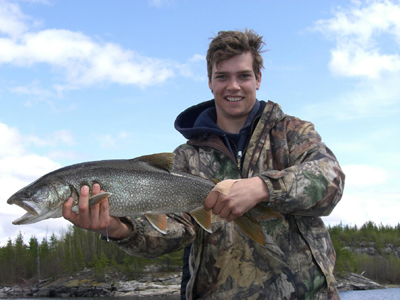