June 4th, 2016: Wow, time flies when you’re getting camp ready for the season!! We’ve been open a couple of weeks now and back in camp since early May. We started off with just a small crew of staff bringing in freight and getting things going. It wasn’t the smoothest opening ever but the staff really pulled together and accomplished a lot in what felt like a short time! Barry and Willie took care of a lot of the plumbing issues, I did all the freight flying with the Cessna 206 and levelled up a couple of cabins that shifted over the winter, Barry also helped with getting the generators going again (there was more maintenance that usual). Tom, Trevor (T3) and Cary were in Norway House managing all the freight, getting the propane filled and loading the airplanes as we came in. The girls took great care of us, feeding us and keeping things clean! Then more staff arrived and we launched the boats, and had a huge battle with our dock. The outposts were set up without any real snags, just generators and the like that gave us a bit of grief. All the staff have been working really hard getting things going, cleaned up and ready for guests, it’s a wonderful thing to have great staff!

The water level is really low, it’s been challenging with our docks and getting into some of the shallow bays that are normally good for Pike. The ice went out in early May, so the water has warmed up quite a bit already. My daughter will likely go swimming next week when she comes to the lodge for a visit, she’ll be the first one going for a swim on purpose this year! She still has school until the end of June but she’ll be in camp right after that.

Tom has been baiting like crazy for the bears and we are 100% successful again this year! Two of the 4 bears taken will make book (over 18 inch skulls) and the other 2 will make ‘all time book’ which means they had skulls over 20 inches! There was a really nice cinnamon bear taken again this year, the other 3 were all black. 3 of the 4 were taken with bows! The greatest part about providing bear hunts is we have drastically reduced the number of nuisance bear kills. It’s been a while since I’ve had to dispose of a bear that was destroying property or becoming a threat to our guests and staff. Baiting has kept them away from the lodge and they now seem to have a natural fear of humans which is better for us and them! There are probably 25 – 30 other bears that we have seen on our trail cameras and in person at our hunting spots so we certainly are not depleting the stock. Next season I’d like to have more bear hunters in camp, we left some of the biggest ones still out there and some really beautiful color phase bears as well!

The fishing started off a bit slow. With the low water levels and very low flow in the rivers entering the lake we really had to change our tactics. It has really picked up lately and we’re having days with multiple trophies much more often again. The Lake Trout have been quite good with a monster 40.5 inch Lake Trout caught during our first week! That might stand all season as the biggest, but you know we’ll do our best to try to beat it! There are tons of Walleye in their usual spots, but surprisingly they are already porpoising in Hole #2! Hopefully it lasts all through June but I’m betting it will end early because it started early. Pike are hitting smaller lures, casting flies in the shallows has been very productive! Some of the guys are already trolling the bigger Bulldawgs and it’s working for them but personally I would stick with some of the smaller stuff for a while.

With the water as low as it is, we have not flown over to the Brook Trout river because we would probably only be able to fish 3 of the 10 sets of rapids we normally fish. We’re planning to go over to explore next week and maybe we’ll be able to sneak through to fish more spots.

I’m doing regular daily fish pictures on our Facebook page, it’s very quick and easy so I have time to do that almost every day. Here is the link to our Facebook Page if you would like to see more pictures more often! BOLTON LAKE LODGE FACEBOOK PAGE

Here are some of our pictures from this year already! 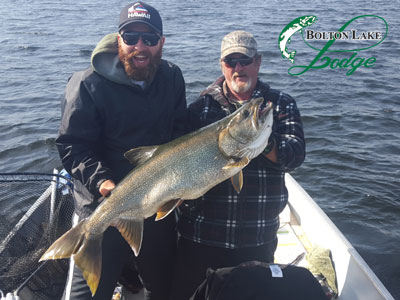 thought I would start off with a couple of big Lake Trout caught this year! The one on the left was 40.5 inches! The other was 37.5! 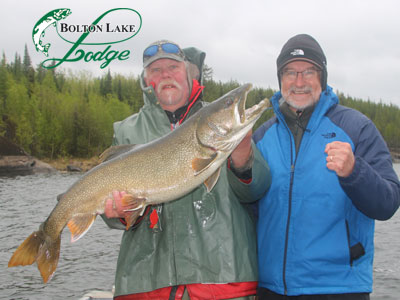 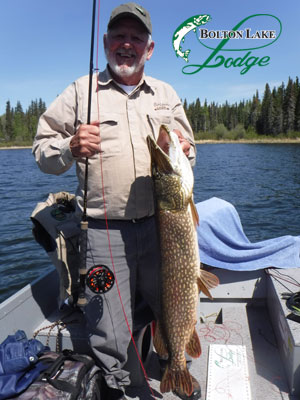 Here are just a couple of the trophy Pike caught and released at Aswap Lake already this year! 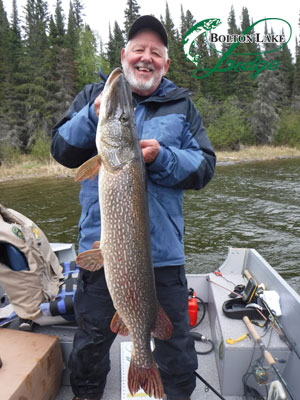 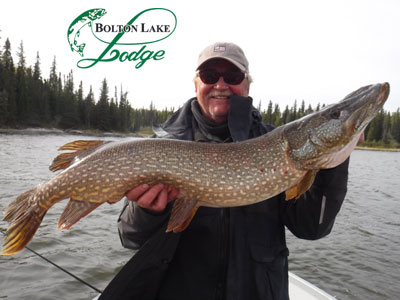 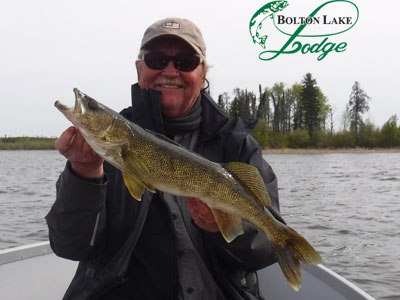 Craig with a couple of nice fish from Aswap Lake this week! His group just left this morning. 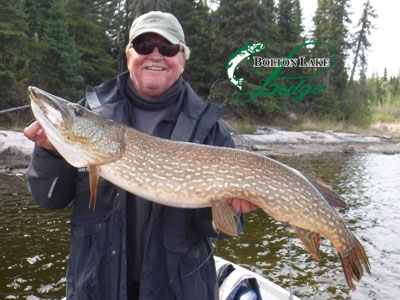 Craig and his friend Rico at Aswap Lake with more nice fish! 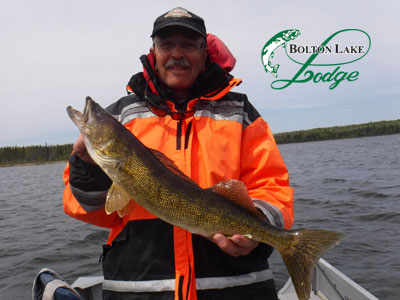 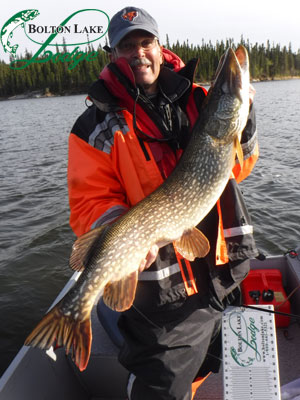 Rico and Craig still fishing at Aswap Lake! I like that measuring board in the background! 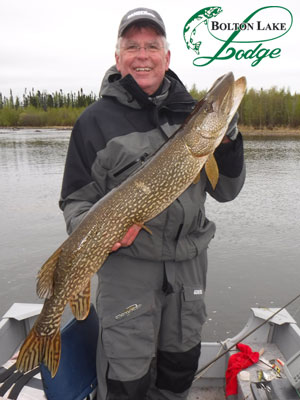 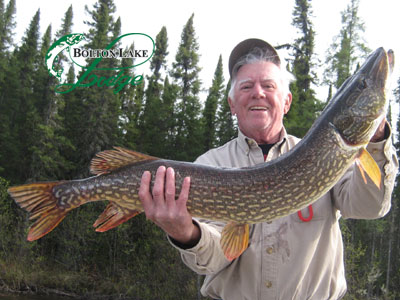 Don with a trophy Pike from Joint Lake! They snuck into a bay and hammered big Pike from 36 – 41.5 inches for 2 hours! 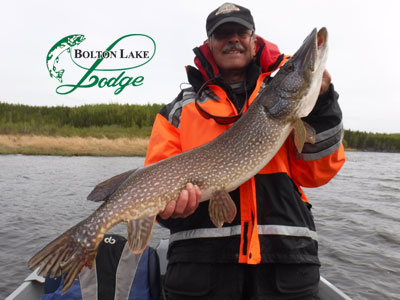 Rico with another big girl from Aswap! 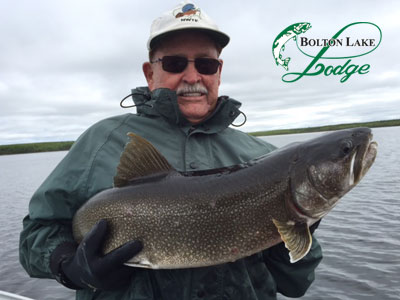 Dick with a trophy Lake Trout from earlier this week! 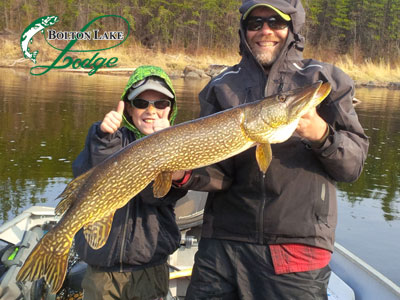 Keiran and Evan with our first trophy Pike of the season! 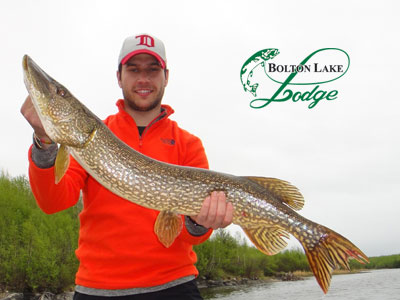 Jon with a nice trophy Pike from last week! 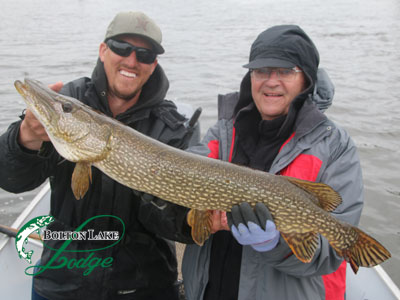 Mark and Greg with a nice Pike from last week as well! This 39 inch Pike was actually a bit bigger than his 41.25 caught on the same day! 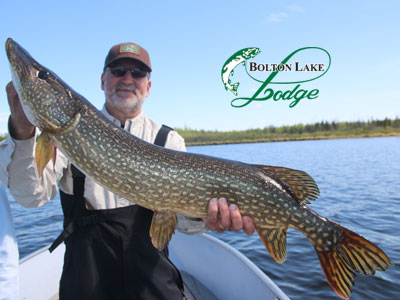 Jeff with a 41.5 inch Pike from earlier this week! 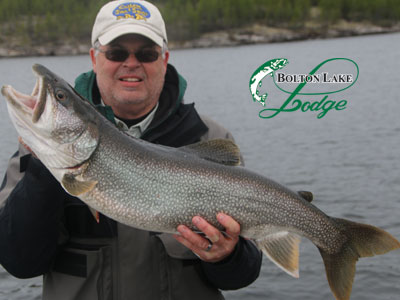 Carl with a 35 inch Lake Trout from earlier this week! 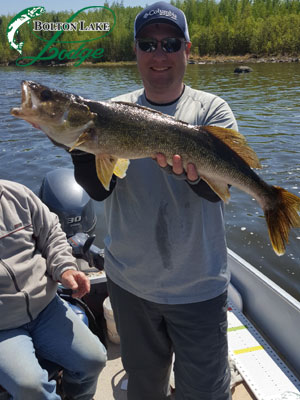 Chad with a real nice 30 inch Walleye from yesterday! 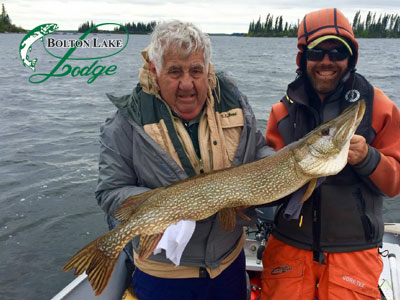 Albert and Evan with Albert’s trophy on his first day! 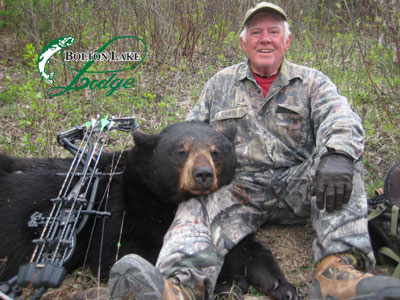 Don with his bear, real nice big head on this one! 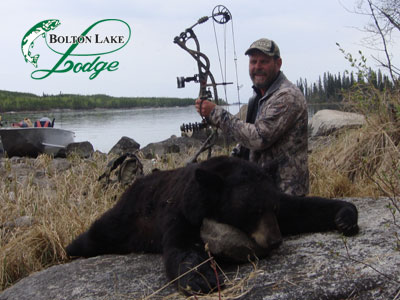 Dan had another bear climbing up his stand while he was waiting for the opportunity to take this one! 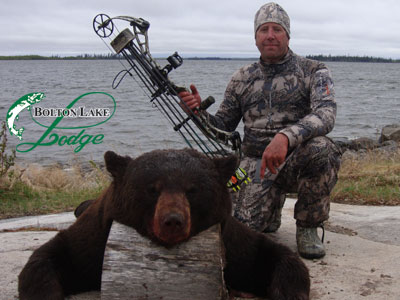 Jason with this year’s winner! Cinnamon coat and huge head! 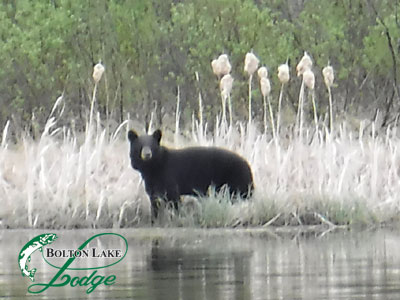 This other bear was watching the fishermen at Aswap Lake, hoping they would throw him a fish I think!