April 29th, 2012: Our season is nearly upon us! I’ll be heading up to the lodge in the next few days with Tom and Trevor (guide) to take our first look since October. I’ve been talking to friends in Island Lake and Norway House and they say that the snow is gone but the ice is still fairly solid on the lakes. There are open spots in the rivers and around shore but the main ice is holding on. This is good news in my opinion because it will be better for fishing to have the ice come off some time in May. There’s absolutely no chance of the ice hanging on until May 20th for our first guests so if you’re one of the first guests coming in, you don’t have to worry about that.

I’ve been spending a lot of time on the new float plane getting it ready for the season. I painted the floats, helped with a new interior, got new decals, life jackets, survival gear, first aid equipment, a new float pump, a new GPS, a “Spot” locator, new ropes, new maps etc! There have been extensive inspections and minor repairs as the plane had been sitting for a few years without any use. This plane is not only going to look great but I believe it’s going to be a great performer for us! It’s currently on wheels so that I can haul a bit more stuff and travel a bit quicker as I plan to do about 3 trips to the lodge before we put it on floats for the season.

When I go to the lodge I’ll be able to report on water levels and ice conditions so expect another update within a week and many more from then on.

The outposts are still sold out for the season, no cancellations lately!! We still have space at the lodge in late May, early July and late July, most of the dates below are still somewhat open but we have filled in some of the spots. Please call to discuss any potential dates.

The freight and fuel haul is scheduled to begin on May 11th. Tons of fuel, beer, pop, food, new outboard motors and miscellaneous other equipment, supplies and food will be flown in from Norway House to Bolton Lake.

Here are a couple of pictures of the new plane and the equipment lost in the bush for now: 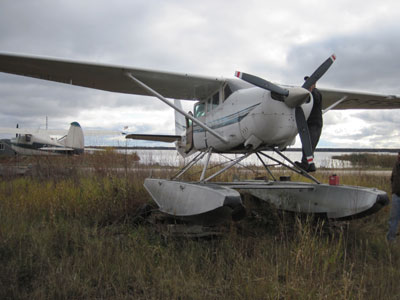 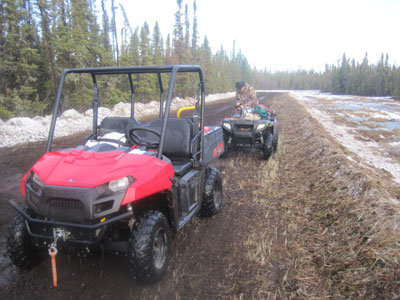